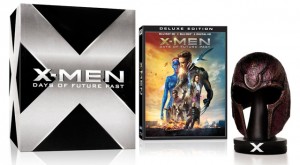 Although it’s only just hit cinemas around the world, X-Men: Days of Future Past is likely to be one of the year’s Blu-ray highlights when it hits stores. While an exact release date is yet to be confirmed, 20th Century Fox has revealed artwork and a special collector’s edition for fans to look forward to.

The highly-anticipated X-Men: Days of Future Past unites the classic cast from the first three X-Men movies (Patrick Stewart, Ian McKellen, Hugh Jackman et al) with their younger equivalents from 2011’s X-Men: First Class (James McAvoy, Michael Fassbender, Jennifer Lawrence and many more). With a storyline that twists it way through multiple timelines and a huge roster of mutant superheroes, Days of Future Past is nothing short of a comic-book epic. And with global box-office receipts after just four days totalling more than $300 million, audiences seem to agree.

When the Blu-ray hits shelves later this year, US Amazon customers will be able to pick up an exclusive collector’s edition set (pictured), which in addition to 3D, 2D and digital copies of the movie, also includes a collectible replica of Magneto’s helmet. In the UK, fans will be able to get their hands on the X-Men: Complete Collection, which comprises all seven X-Men movies (including Wolverine’s two solo outings) and a replica of Professor X’s Cerebro helmet.

Look out for more details on X-Men: Days of Future Past later this year.