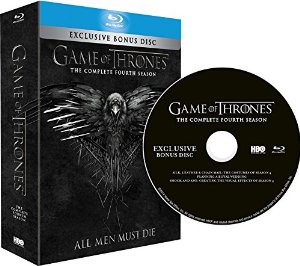 Get ready to go back to Westeros… Season 4 of TV phenomenon Game of Thrones is heading to Blu-ray Disc. The five disc set, comprising all 10 episodes and a range of exclusive bonus content, is due for release on the 16th February.

Season 4 continues author George R.R. Martin’s epic fantasy saga, starting as the Lannisters’ hold on the Iron Throne remains intact in the wake of the Red Wedding slaughter that wiped out many of their nemeses. But can they survive their own egos as well as new and ongoing threats? Meanwhile, an unbowed Stannis Baratheon continues to rebuild his army; the Lannister-loathing ‘Red Viper of Dorne,’ Oberyn Martell, arrives at King’s Landing for Joffrey’s wedding to Margaery Tyrell; Daenerys Targaryen and her dragons and unsullied force aim to liberate the largest Slavery City in the east…with long-range plans to take back the Iron Throne; and a depleted Night’s Watch faces the advance of Mance Rayder’s wildling army, who are in turn running from the undead White Walkers.

Extra content on the Blu-ray includes deleted scenes, bloopers, an interactive guide to Westeros, commentaries and several in-depth making-of features looking at everything from costumes to visual effects.