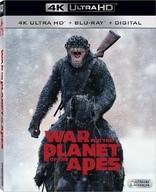 Twentieth Century Fox Home Entertainment has officially announced that it will release War for the Planet of the Apes on Blu-ray and Ultra HD Blu-ray on 24th October.

When a failed experiment gives a chimpanzee human-like intelligence, while also releasing a virus which nearly destroys mankind, the Earth is left shattered. Caesar, the ape leader, and his colony are discovered by a band of humans as both species battle to survive. After Caesar suffers unimaginable losses, he vows to avenge his fallen by plotting a deadly war against the humans, one which will eventually decide the fate of the planet.