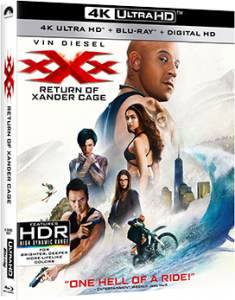 Vin Diesel reprises his role as Xander Cage, the ruthless antihero, who’s called back into action when a group of mercenaries steal a hi-tech weapon that poses a global threat. Xander must lead a team of death-defying adrenaline junkies on a mission to save the say, while looking as awesome as possible as they do it. The movie features a powerhouse international cast, including Samuel L. Jackson, Donnie Yen, Deepkika Padukone, Kris Wu, Ruby Rose and Tony Jaa.

Both the Ultra HD Blu-ray and Blu-ray combo packs come loaded with over an hour of special features, including in-depth interviews with the cast, a behind-the-scenes look at the film’s incredible stunts, a look at the locations, and much more.