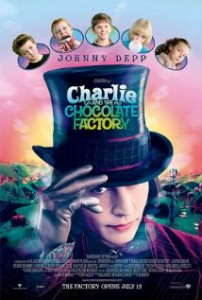 This weird and wonderful take on one of Roald Dahl best known stories will be celebrating its 10th anniversary in March (the book itself celebrated 50 years this year).

Warner Bros is preparing the film for Blu-ray for 3rd March. Given Burton’s rich use of colours, the re-master should be quite a treat.

As a brief synopsis, Wonka launched a worldwide contest to select an heir to his candy empire. Five children, including Charlie, drew golden tickets from Wonka chocolate bars and won a tour of the magical chocolate-making facility. The experience was life-changing – on many astonishing levels; including interactions with the wonderful Oompa Loompas, earnest and dedicated workers that add to the film’s many masterful visual inventions.

Full specs and supplements have not been detailed yet but the release will include a 32-page photobook.