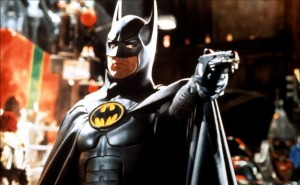 In the spirit of celebrating Tim Burton movie-making anniversaries, it’s exciting to think that a 25th anniversary edition of Batman is now available on Blu-ray. In 1989, Burton breathed new life into one of the most complex and intriguing characters in popular culture. Casting off the 1960’s camp depiction of the Caped Crusader, Burton re-drew Batman, in the form of Michael Keaton, as a conflicted, troubled hero; and captured Gotham City, as a sinister, God-forbidden place. It was the top grossing movie that year. Jack Nicholson won plaudits for his role as the mischievous and maniacal Joker and Kim Basinger played the beautiful, resourceful photojournalist Vicky Vale, desired by both men.

The anniversary boxset contains a supplement which explores the marketing, merchandising and franchise foresight that set the template for the next 25 years.