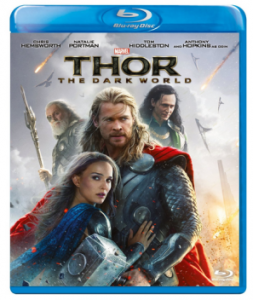 There’s a nice surpise instore for Marvel fans this week, as the special features for Thor: The Dark World have been confirmed, including details of the Blu-ray exclusive “Marvel One Shot” short film.

In the main feature, Chris Hemsworth makes a welcome return as our beloved Norse superhero in the latest instalment of the Thor saga. This time the titular god of thunder must save the universe from shadowy enemy the Dark Elves and their deadly weapon the Aether.  With “eye-popping” special effects, this movie will look spectacular on Blu-ray or Blu-ray 3D.

We were particularly excited to hear details on the highly anticipated, Blu-ray exclusive short, All Hail The King. It’s been confirmed that the short stars Ben Kingsley, and picks up after the events of Iron Man 3. Writer Drew Pearce has said that “by the end of the short, there are definitely a lot of exciting other places that are brought up in it that could then go in the Marvel universe”, so this is one Blu-ray exclusive that Marvel fans won’t want to miss. Other special features have been confirmed too, and will include a look at filming the movie, never before seen deleted scenes, a gag reel and an audio commentary.

The release date hasn’t been announced yet, so keep an eye on Blu-ray.com for further details.