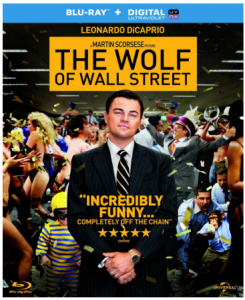 On 19th May Universal Studio’s “audacious, riotous epic”, The Wolf of Wall Street, will be making its way onto Blu-ray.

Directed by the legendary Martin Scorsese and starring the brilliant Leonardo DiCaprio in the lead role, this film is among the front runners at this year’s Oscars. Based on the real life story of stockbroker Jordan Belfort (DiCaprio), the movie follows his debauched rise to become one of the most profitable bankers on Wall Street. Revelling in Jordan’s excesses, the movie tracks his rise to becoming one of the wealthiest bankers in the world, earning over $1 million a week.

The Blu-ray extras include a behind the scenes featurette, a piece on making the movie and a roundtable discussion on the film’s themes with stars Leonardo DiCaprio, Jonah Hill and Margot Robbie.

It’s been rumoured that a Limited Edition Steelbook Blu-ray will be released, so keep an eye on Blu-ray.com for more information.