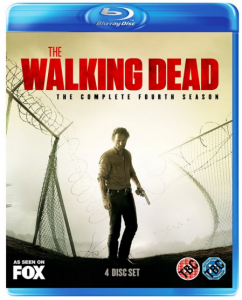 If you witnessed the traumatic end to The Walking Dead’s fourth season on TV, you’ll be pleased to hear it will be available on Blu-ray in the UK from September 15th.

The box set was announced earlier this year, but the special features hadn’t been finalised. Anchor Bay Entertainment has now confirmed that the Blu-ray set will come with exclusive extra, including additional audio commentaries and several “extended” episodes, debuting for the first time ever. On top of this, there will be never before seen production footage, behind-the-scenes clips and deleted scenes.