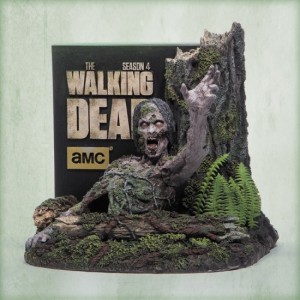 TV audiences in the US and UK have just witnessed the traumatic end to The Walking Dead’s fourth season, and now it’s on its way to Blu-ray.

The zombie apocalypse show continues to go from strength to strength, with the fourth season drawing record numbers of viewers and continuing to shock audiences with its no-holds-barred approach. The season opens after a prolonged period of peace for the residents of the prison – but as you might expect, this doesn’t last for long. Old cast members and fan favourites including Rick (Andrew Lincoln), Daryl (Norman Reedus) and the Governor (David Morrissey) return alongside new faces in what’s proved to be one of TV’s most popular modern dramas.

Special features for the set have yet to be revealed, but you can expect the same behind the scenes insight into the making of this spectacular show. AMC has however revealed a gruesome limited edition ‘Tree Walker’ package (pictured) created by McFarlane toys.