It’s official – it’s December and the Christmas countdown has begun! In order to celebrate the holiday season, we’re going to be counting down our 12 favourite Christmas films, all the way up to Christmas Eve. Make sure you keep up to date and let us know if you think we’ve missed anything in the comments below. 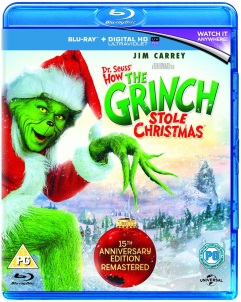 In the magical land of Whoville, all the Whos that live there love Christmas – celebrating it with much happiness and joy. However, The Grinch,  played by Jim Carrey, lives away from the rest of the town miserably avoiding anything to do with Christmas.

The Grinch is happy with his isolation, until a young girl called Cindy Lou decides that the town is missing the point of Christmas, and decides to learn more about the Grinch in the hope of bringing him closer to Whoville.

Special features include audio commentary by director Ron Howard, a look at the set decoration, and a documentary about the makeup application and design. 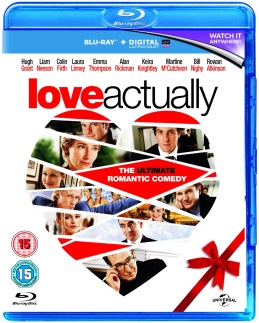 Set primarily in London, Love Actually shows a very British approach to the holidays, one which will be familiar to viewers all over the country.

Love Actually comes with a number of bonus features, including almost 40 minutes of deleted scenes, a look at the music of the movie, and selection of music videos. 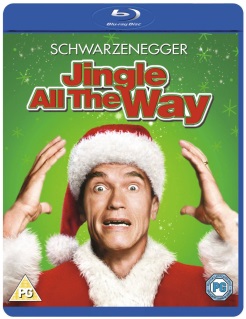 Starring Arnold Schwarzenegger and comedian Sinbad, Jingle All the Way is a Christmas comedy caper about two competitive fathers who are both trying to get the must-have toy – a Turbo Man figure – for their sons. However, no matter where they try, everywhere is sold out, leading to a desperate and hilarious battle to get their hands on the toy at all cost.

The Blu-ray version of Jingle All the Way comes as an extended cut, offering viewers scenes which have never been seen before. The disc also comes with three bonus features: the making of the Turbo Man suit, an interview with the kids of the film, who discuss their ideal superhero, and a look at the fictitious Turbo Man action hero portrayed in the film.