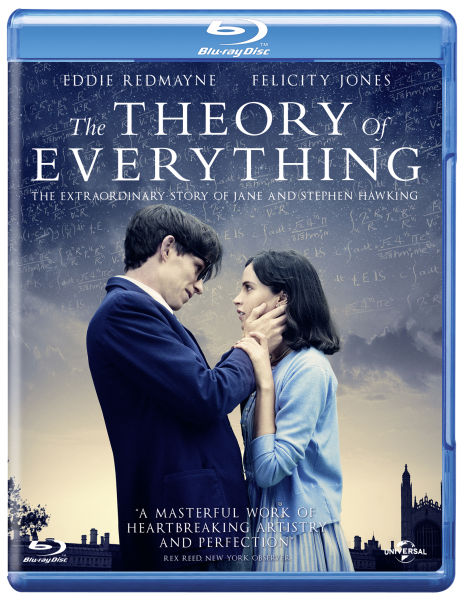 This charming, moving and powerfully acted film about the enigma that is Stephen W Hawking is available on Blu-ray from May 11th.

Based on Jane Hawking’s memoir Travelling to Infinity: My Life with Stephen and directed by Academy Award winner James Marsh (Man on Wire), The Theory of Everything is a poignant portrayal of one of the world’s greatest living minds and the woman who persevered for love. Starring Eddie Redmayne, Felicity Jones, and Tom Prior, The Theory of Everything has been nominated for five Academy Awards including Best Picture, Best Actor, Best Actress, and Best Adapted Screenplay.

Once a healthy, active young man, Hawking received an earth-shattering diagnosis at 21 years of age. With Jane by his side, Stephen embarks on his most ambitious scientific work, studying the very thing he now has precious little of—time. Together, they defy impossible odds and break new ground in medicine and science.

The film departs from the Hollywood norm in showing how Stephen and Jane effectively converted their marriage into something akin to an open relationship. The film paints a portrait of a flawed marriage which ultimately does not last. It’s a gentle, tender story of lovers who found friendship during and after their marriage.