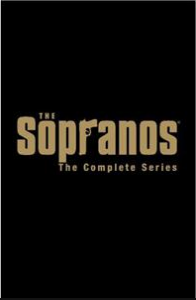 The complete series of HBO’s game changing TV drama, The Sopranos, is set to be released on Blu-ray later this year.

The iconic drama follows the Italian-American mobster Tony Soprano (the late James Gandolfini) as he tries to balance the competing pressures of family life and organised crime. The series has won numerous prestigious Awards, including at the Emmys and the Golden Globes, and received exceptionally high praise from critics. It was described by the Guardian as “the best TV drama of all time”, while the New York Times thinks it is “maybe the greatest work of American pop culture in the last quarter century.”

The mammoth 28 disc Blu-ray set will feature all 86 episodes and come with an impressive five hours of bonus features. This will include never before seen scenes, footage from a roundtable dinner with the cast and crew, over 25 audio commentaries, and a new and exclusive featurette exploring how The Sopranos transformed the TV landscape.

The European release date is still to be confirmed, so for more information, head to High-Def Digest.