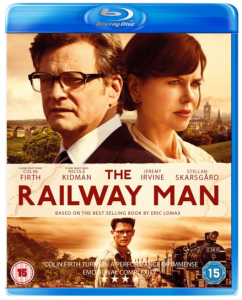 Lionsgate Home Entertainment has confirmed that The Railway Man, Colin Firth’s latest polished historical drama, will be hitting Blu-ray from 5th May in the UK.

The film portrays the tender memoir of Eric Lomax, a British Prisoner of War working for the Japanese on the Burma railway in World War Two. Jeremy Irvine is sensitively cast as the young Eric, who was brutally tortured while working on the railway line. Colin Firth gives a “perfect, understated performance” as Eric, after the war, attempts to come to terms with his nightmarish experiences in the camp. According to critics this moving adaptation “has the ability to engross and set you emotionally on edge at the same time.”

Fans of the original book who are eager to learn more about the film should be delighted to hear the Blu-ray will feature interviews with the key members of the cast and crew, including both Colin Firth and Jeremy Irvine.