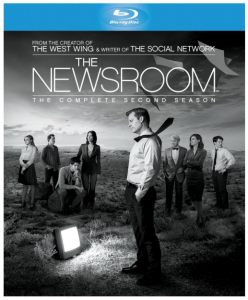 The second season of Emmy Award winning drama, The Newsroom, is set to hit Blu-ray shelves from the 27th October.

The latest political drama from Aaron Sorkin, creator of the West Wing, chronicles the events taking place behind the scenes at the fictional Atlantis Cable News (ACN) channel. Starring Jeff Daniels, Emily Mortimer, Olivia Munn and Dev Patel, critics have commented on how closely the series reflects daily life in a real newsroom. Season Two follows the fallout after the team falsely reports that the US Marine Corps used sarin gas in Afghanistan – loosely echoing a real life news scandal from 1998, where CNN and Time  were both criticised for unreliably reporting that the US had used sarin gas during the Vietnam War.

The Blu-ray will come with a commentary from Sorkin, a season one recap, and deleted scenes.