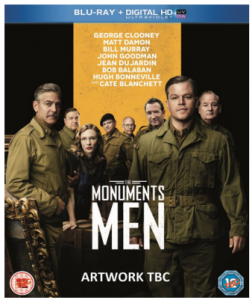 George Clooney’s latest directorial effort, The Monuments Men, will be heading to Blu-ray in the UK from 20th May.

The Monuments Men retells the story of a World War Two Allied mission to recover stolen art from the Nazis. The action begins in March, 1943, as Adolf Hitler pillages Europe’s greatest artwork to build his own museum. Meanwhile in America, art curator Frank Stokes (George Clooney) is persuading the US Government to allow him to pull together a platoon of museum directors, curators, and art historians to rescue these masterpieces. Described by critics as “a wonderfully deft and unexpected tale”, and with an A-List cast including Matt Damon, Bill Murray, Jean Dujardin, Cate Blanchett and John Goodman, this is one movie well worth checking out on Blu-ray.

A real treat for history fans, the Blu-ray bonus materials include an interview with one of the last surviving members of the original mission, as well as two in-depth pieces on the making of the film.

For more information, head over to High-Def Digest.