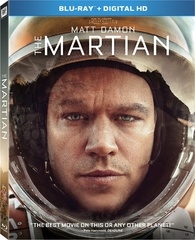 20th Century Fox has announced full details of the special features which will appear on the Blu-ray and Blu-ray 3D release of The Martian, which is expected to be released in Europe in the first few months of next year.

The Martian tells the story of Mark Watney, a US astronaut who is left stranded on the surface of Mars and presumed dead following a freak accident. Watney must then work out a way to contact Earth and face the challenge of surviving long enough in the Martian desert to be rescued. The film stars Matt Damon, Jeff Daniels, Michael Pena, Sean Bean and Kate Mara, and was directed by the king of science fiction, Ridley Scott.

Special features will include in-depth looks at the screenplay and direction of the film, the cast and costumes, and the recreation of the Martian surface. There is also a gag reel and production gallery, meaning there’s plenty for fans – including Barack Obama – to sink their teeth in to.