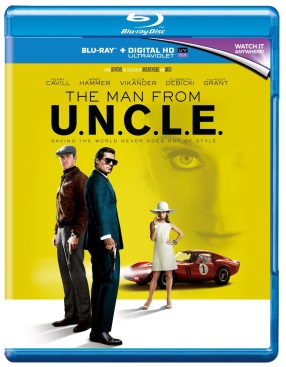 Warner Brothers Home Entertainment has revealed that The Man from U.N.C.L.E. will be released on Blu-ray in the UK on December 7th.

The Man from U.N.C.L.E brings the classic 1960s TV series of the same name back to life. Set in the same era as the original show, The Man from U.N.C.L.E stars Henry Cavill and Armie Hammer as US agent Napoleon Solo and Russian Illya Kuryakin, two secret agents who must work together to stop a mysterious international criminal organisation. Of course, it being the height of the Cold War, the Russian and the American aren’t exactly the most compatible of sorts, however they must put their differences to one side in order to prevent a potential nuclear catastrophe with global consequences.

Director Guy Ritchie has done a stellar job of bringing this sixties classic up-to-date, with laughs and action both in great supply throughout.

The Blu-ray comes with a number of special features, including a feature about how the film recreated the sixties, a fly-on-the-wall look on set and a documentary about the vehicles in the film.

Special features include the making-of, interviews with the cast and crew, and a number of deleted scenes.