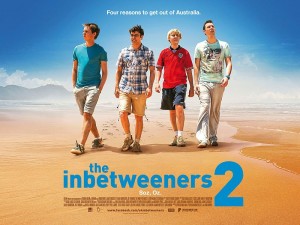 The Rudge Park massive, Will, Jay, Neil and Simon, are back with more cringeworthy misadventures, this time down under in The Inbetweeners 2.  Released on 1st December 2014 on Blu-ray, the box office smash delivers more crude mayhem, not to mention a Peter Andre inspired car.

The journey starts with Jay (James Buckley) boasting about his DJ career and celebrity conquests such as Kylie.  Desperately single Neil (Blake Harrison) and Joe (Simon Cooper) reunite with a brow-beaten Will (Simon Bird) and head out to Australia to join in the fun, but their fantasies are flushed away as it turns out Jay is just the club’s loo cleaner.

Earning over £45million at the box office hit writers and directors, Damon Beesley and Iain Morris, have found a stellar formula with the boys from South West London.  The comedy is a sequel to The Inbetweeners Movie, based on the Channel 4 series The Inbetweeners.  Special Blu-ray features include  a making-of documentary called ‘East End to The Outback’, extended deleted scenes and commentary tracks from Damon Beesley, Iain Morris and the lead actors.

The Inbetweeners 2 is available to pre-order on Blu-ray now. Den of Geek has more details.