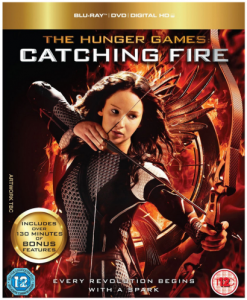 The Hunger Games: Catching Fire, one of the most talked about films of 2013, is due to hit Blu-ray from 17th March.

After her victory at the previous Hunger Games, Katniss Everdeen (Academy Award winner Jennifer Lawrence) is trying to keep a low profile, however tension in the Districts is mounting. In a desparate bid to keep the people entertained, President Snow (Donald Sutherland) introduces new rules for the 75th Annual Hunger Games, in which all participants must be reaped from the existing crowd of victors. Katniss and Peeta (Josh Hutcherson) are pulled back into the arena again one more time, but with rebellion building, will Katniss keep her eye fixed on her real enemy?

This “visually thrilling” movie will provide an incredibly immersive experience on high-def Blu-ray. The disc will also come with an exclusive nine-part documentary series about the making of the movie,delving into all aspects of the impressive production design. Plus, the Blu-ray will feature deleted scenes, as well as a director and producers’ commentary. In fact, Lionsgate have released a trailer specifically for the Blu-ray release, which you can check out here.

For more details, head over to MovieWeb.com.