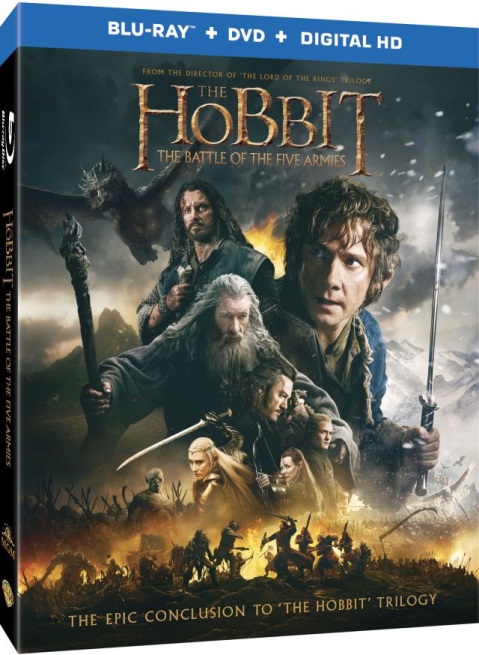 The theatrical edition of Peter Jackson’s The Hobbit: The Battle of the Five Armies will be available on Blu-ray in the UK from 20th April. For the super keen, Amazon is accepting pre-orders now. The third and final part of the trilogy again stars Martin Freeman, Richard Armitage, Ian McKellen, Benedict Cumberbatch, Luke Evans, Cate Blanchett, Lee Pace, Orlando Bloom and Evangeline Lilly.

The Hobbit Trilogy tells a continuous story set in Middle-earth 60 years before The Lord of the Rings. In the final entry, the Dwarves of Erebor have reclaimed the vast wealth of their homeland, but now must face the consequences of having unleashed the terrifying Dragon, Smaug, upon the defenceless men, women and children of Lake-town.

As Thorin succumbs to dragon sickness, he sacrifices friendship and honour for the legendary Arkenstone treasure. When Bilbo (Freeman) realises he can’t make him see reason he has to make a desperate and dangerous choice, unaware of the perils that lay ahead. Namely an ancient enemy has returned to Middle-earth. Sauron, the Dark Lord has sent forth legions of Orcs in a stealth attack upon the Lonely Mountain. Soon Bilbo finds himself fighting for his life and the lives of his friends in the epic Battle of the Five Armies, as the future of Middle-earth hangs in the balance.

The first two instalments dazzled and impressed on Blu-ray and The Battle of the Five Armies promises to continue that tradition. Expect lush shire greens, sun-kissed browns and some of the most epic battles ever seen on screen. Not to mention a surround sound track that’ll make you think the battle is raging inside your living room.

The Blu-ray version is also available as part of a 3D combo pack. Special features will include a behind the scenes documentary, theatrical and ‘legacy’ trailers and a piece on recruiting the five armies. For more details, click here.