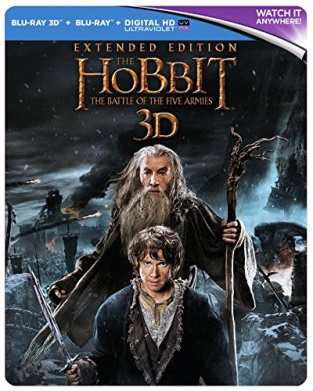 On November 23rd, The Hobbit: The Battle of the Five Armies will be available as an extended edition Blu-ray. As every avid Lord of the Rings fan will know, each film release is followed by an extended edition, which offers a longer cut featuring scenes not seen in the original.

Bilbo Baggins’ epic adventure comes to a dramatic conclusion as he reaches Erebor and encounters the dragon Smaug, while five armies assemble for a battle that will decide the fate of Middle Earth. Martin Freeman, Sir Ian McKellen and Richard Armitage all return as Bilbo Baggins, Gandalf and Thorin, alongside an all-star cast including Orlando Bloom, Christopher Lee and Benedict Cumberbatch.

The extended edition also comes with a mountain of extras, with over nine hours of audio commentary, documentaries and behind the scenes features.

With The Hobbit trilogy complete, fans will be able to get their hands on all three extended editions as part of a Blu-ray box set, also due out on November 23rd.