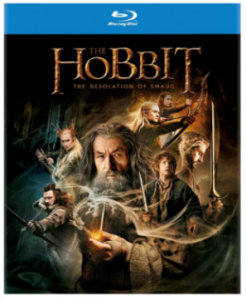 The Hobbit: Desolation of Smaug, the second instalment of Peter Jackson’s adaptation of J.R.R. Tolkein’s classic children’s novel, will be released on Blu-ray and Blu-ray 3D in the UK on 7th April.

Bilbo (Martin Freeman), Gandalf (Ian McKellen), and the band of Dwarves resume their mission to take back the Dwarf Kingdom of Erebor in this latest film. Jackson conjures up more “far too many fabulous special effects even to mention” as the group encounter fire breathing dragons and take on a deadly group of trolls.  Unsurprisingly, this film is among the front runners for the Best Visual Effects Award at this year’s Oscars, so we’re excited to see it in glorious high definition.

The special features on this Blu-ray will take you right into the heart of the film making process, with behind the scenes tours, production diaries and a director’s commentary.

For more information, check out CinemaBlend.com.