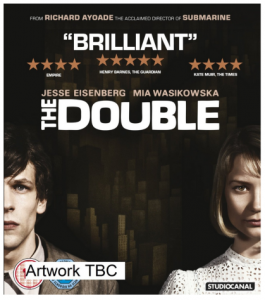 Mind-bendingly brilliant doppelganger movie, The Double, from up and coming film director Richard Ayoade, is set to hit Blu-ray in the UK from August 4th.

The Double is a modern take on the last novella ever written by legendary Russian author, Fyodor Dostoevsky, before he was sent to a Labour camp in Siberia. Shy data processor Simon (Jesse Eisenberg) struggles with self-confidence. Simon’s world is turned upside down when a new co-worker, James joins his office. James is Simons exact physical double, but he’s also everything Simon is not; charismatic, confident and charming. With its subtle blend of dark humour and quirky cinematography, this smart satire has been described by critics as “brilliant”, “bitterly wonderful” and “irresistible”.

The Blu-ray special features are still to be confirmed, so watch this space.