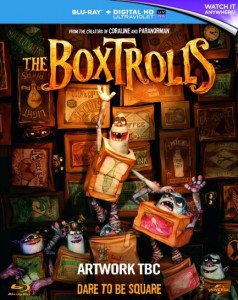 As a New Year treat, quirky stop-motion animation The Boxtrolls is coming to Blu-ray on January 20th, as part of 2D and 3D Blu-ray/DVD/Digital HD combo packs.

The Boxtrolls tells the story of how a young orphaned boy raised by underground cave-dwelling trash collectors, tries to save his friends from an evil exterminator. The fantasy-comedy film is based on the children’s novel ‘Here Be Monsters’ by Alan Snow. It boasts a stellar cast: Elle Fanning, Isaac Hempstead Wright, Ben Kingsley, Simon Pegg, Nick Frost, Toni Collette, Jared Harris, Richard Ayoade and Tracy Morgan provide the voices to the sumptuous animations.

The Blu-ray release is presented in 1080p with DTS-HD Master Audio 5.1 surround. It includes lots of special features including a commentary with the directors, Graham Annable and Anthony Stacchi, interviews with its talented cast on what it’s like to voice an animated puppet; an explanation of how Snatcher’s face changes shape due to his cheese allergy and other big reveals (including how they combined traditional stop-motion animation with visual effects to create the impressive dance scene). Blu-ray.com has a complete list of features.