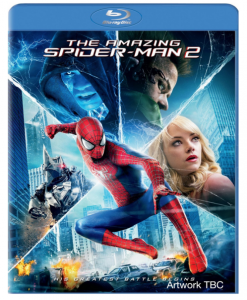 The second instalment of director Mark Webb’s marvel-ous reboot of the Spider-Man franchise will hit Blu-ray and Blu-ray 3D in the UK from August 19th.

The action in this movie kicks off with Spider-Man (Andrew Garfield) doing what he does best, tackling crime in New York City. However, Spider-Man finds himself in increasingly hot water after the mysterious company OsCorp sends a slew of super villains to battle against him.  The film comes with an incredible all-star cast including Emma Stone, Jamie Foxx and Paul Giamatti. It is also jam-packed with astounding stunts and visual effects which will look and sound fantastic in HD.

The Blu-ray is also set to include an extensive array of special features, including a six part behind the scenes documentary, a film maker’s commentary, deleted scenes and music videos. One feature, called ‘Peter Meets His Father’, has fans guessing at whether the disc might tease the upcoming third movie.