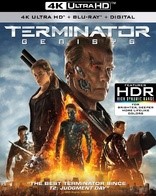 Starring Arnold Schwarzenegger, Jason Clarke, Emilia Clarke, Jai Courtney and J.K. Simmons, Terminator Genisys sees Schwarzenegger resume his iconic role as the unstoppable robot from the future. In the latest explosive chapter of the franchise, set during the war between man and machine, Kyle Reese is sent back to 1984 by resistance leader John Connor to protect his young mother, Sarah. However, unexpected events have altered the past, and threaten the future for all mankind. Now, Reese must join forces with Sarah and her guardian – The Terminator – to save the world.

It is the first time the film will be available on Ultra HD Blu-ray, the new format which offers stunning 4K resolution, HDR and enhanced audio. The Ultra HD Blu-ray comes with a number of special features, including a look at the making of the film, and a multi-angle scene breakdown.