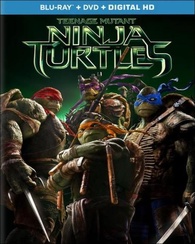 The modern remake of the much-loved kids’ franchise Teenage Mutant Ninja Turtles is set to make an appearance on Blu-ray later this year, while the original big screen outing for the heroes in a half shelf is also coming back to BD very soon.

The lovable turtles, Leonardo, Michelangelo, Donatello and Raphael, power up once more to see off their arch-enemy Shredder, who’s trying to seize control of New York City. When savvy young reporter April O’Neil (Megan Fox) gets involved, she uncovers a deadly plot that could destroy the city. This fun movie features some brilliant use of CGI and performance capture techniques pioneered in James Cameron’s Avatar to bring the turtles to life.

The Blu-ray will also come with a number of turtle-tastic special features, including extended scenes, a look at the making of the song “Shell Shocked,” and limited eye masks available in specially marked packages. For more information, check out High-Def Digest.

In the meantime, a Blu-ray version of the Turtles’ original 1990 big screen adventure is due to hit shelves from October 20th. You can pre-order the disc from Amazon now.