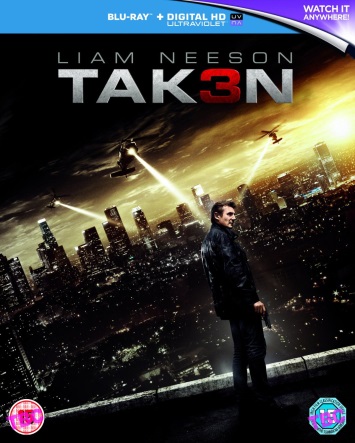 Taken 3 follows the hugely popular first instalment of the franchise Taken, in which a father with ‘special skills’ rescues his daughter from a human trafficking syndicate.

In Taken 3 ex-government operative Bryan Mills (Liam Neeson) finds his life is shattered when he’s falsely accused of a murder that hits close to home. As he’s pursued by a savvy police inspector, Mills employs his particular set of skills to track the real killer and exact his unique brand of justice.

As with the previous two films, Taken 3 blasts through a series of action set pieces which should easily please those who like lots of things that go boom accompanied by flashy camera angles and occasional fight choreography. Special features include deleted scenes, A Taken legacy, theatrical trailer and an animated tour through one of the character’s secret hideaway and the weapons it holds.