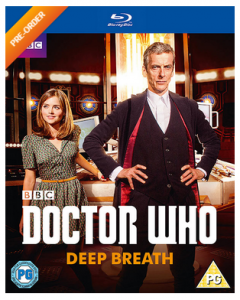 Attention Whovians! From the 8th September, you will be able to take home Deep Breath, the first episode in the latest series of Doctor Who, on Blu-ray.

Written by the brilliant Steven Moffat, this episode will see Peter Capaldi appear as the all-new twelfth Doctor in a pulse racing adventure through Victorian London. He is set to be rejoined by his trusty assistant Clara (Jenna Coleman), as well as Madame Vastra (Neve McIntosh), Jenny Flint (Catrin Stewart) and Strax (Dan Starkey).

The Blu-ray will include a 10 minute behind the scenes feature, as well as some exclusive bonus content. After years of speculation as to who would take over from the incredibly popular Matt Smith, the wait for the new Doctor is almost over! If you miss Deep Breath on TV, or are just a Doctor Who addict, this is one Blu-ray you won’t want to miss.