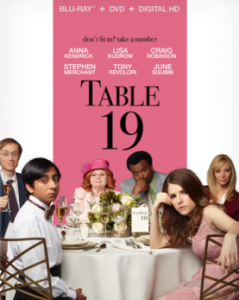 For anyone who’s ever sat at THAT table… this is the film for you. Table 19 lands on Blu-ray on 13th June, just in time for the summer wedding season!

Starring a hilarious ensemble cast, including Academy Award Nominee Anna Kendrick, Lisa Kudrow, Stephen Merchant and Craig Robinson, this is a laugh-out-loud tale of mischief and matrimony. After being relieved of her maid of honor duties following a split with the best man, Eloise (Kendrick) decides to attend her oldest friend’s wedding anyway. She finds herself seated among random strangers in the back of the room, cast away from the head table. As the unlikely g