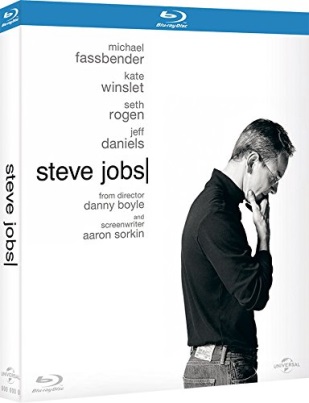 Steve Jobs, the biopic about the charismatic co-founder and chairman of Apple, is set for Blu-ray release on 21st March 2016.

Michael Fassbender takes up the role of Jobs, starring alongside Kate Winslet, Seth Rogen and Jeff Daniels. The film tells the story behind of one of the world’s most iconic businessmen, following his life through three of the business’ biggest product launches.

Aaron Sorkin, the screenwriter behind The West Wing, The Social Network and Moneyball was drafted in to write the script for Steve Jobs, giving the audience an engaging and fast-moving look at the life of the man behind one of the world’s most famous companies. With Danny Boyle directing, Steve Jobs is a must-watch film.

We currently don’t have any information on special features, but we’re sure it’ll be loaded with goodies for you to sink your teeth in to! Check back here for more info soon.