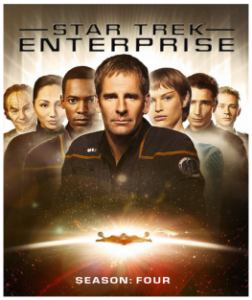 In an announcement sure to cause excitement among Trekkies, Paramount has confirmed that Star Trek: Enterprise Season Four will arrive on high definition Blu-ray from 1st April.

The adventures continue at a sky-rocketing pace in Season Four as Captain Archer (Scott Bakula) continues to lead the crew on an exploration across the universe. While Archer works to rally support from a coalition of planets to prevent an intergalactic war, the Enterprise NX-01 encounters the Mirror Universe and the legacy of the Vulcan Eugenics Wars.

In honour of the occasion, Paramount has released a Blu-ray trailer, which you can watch below. Bonus content is still to be confirmed, so keep an eye on Blu-ray.com for more details.