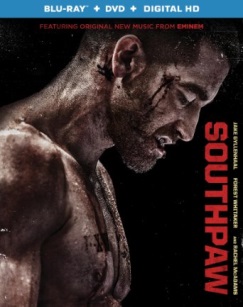 Anchor Bay Entertainment and The Weinstein Company have announced the Blu-ray release of this summer’s hard-hitting drama Southpaw.

Jake Gyllenhaal plays Billy “The Great” Hope, the reigning Light Heavyweight Boxing Champion of the World. Life seems great for Hope, who has a beautiful wife, daughter and an enviable lifestyle. However, it soon comes crashing down around him following the tragic death of his wife, and the rehoming of his daughter. After falling into a spiral of depression, Hope turns to trainer Tick Williams, played by Forest Whitaker, who works to get him back on his feet and regain the love and trust of his fans, family and friends.

The Blu-ray will be available to buy starting from the 23rd November. Its special features will include deleted scenes, a Q&A with the cast, a feature on the film’s fighting, and an extended training montage showing how Gyllenhaal got in to such incredible shape.