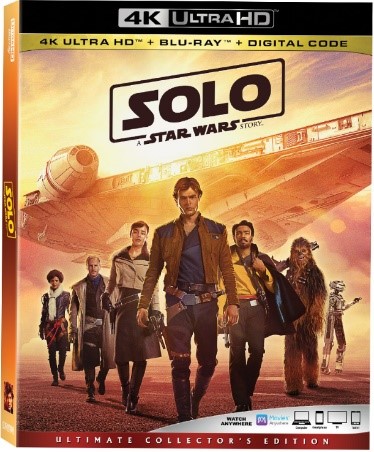 Get ready to step aboard the Millennium Falcon and set a course for another adventurous mission – Disney has confirmed that Solo: A Star Wars Story is set for release on 4K UHD and Blu-ray on September 25th.

Reunite with Han Solo, Chewbacca and the Millennium Falcon’s crew in this hectic space heist that will take you on a fun filled journey through the stars. The film stars Alden Ehrenreich as the charismatic captain, Joonas Suotana as his furry friend and Donald Glover as Lando Calrissian, the risky gambler with nothing to lose. Emilia Clarke and Woody Harrelson also star in this action-packed story exploring the origins of the legendary hero we know and love.

Solo: A Star Wars Story on 4K UHD and Blu-ray is packed to the brim with special features that will suck you in to the wonderful world of Star Wars. Experience extended and deleted scenes, engaging discussions with the star-studded line up as well as father and son screenwriters Jonathan and Lawrence Kasdan, plus dive into the making of the film through several documentaries and featurettes.