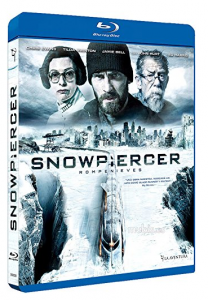 One of this summer’s best reviewed films, Snowpiercer, from acclaimed South Korean director Boon Jong-Ho, is coming to Blu-ray later this year and the special features have just been confirmed.

Blending a whole host of different influences, this intelligent action film, based on a French graphic novel, boasts outstanding performances from an all-star cast including Hollywood A-Lister Chris Evans, British talent Tilda Swinton and South Korean star Kang-ho Song. The film is set in a dystopian future where a failed climate change experiment has wiped out almost everyone, apart from a lucky few who were aboard a sleeper train. As the train continues to travel across the globe, a sinister class system begins to emerge. Boon Jong-Ho’s  ambitious vision has stunned top critics, who have described the Snowpiercer as “alive with ideas and imagination”, “glitteringly arresting” and “wonderfully realised”.

The Blu-ray special features are pretty classy too. There will be a critic’s commentary, an interview with two of the biggest stars in the movie, Tilda Swinton and Chris Evans, and a concept art gallery. Underrated in cinemas, Snowpiercer is definitely one to check out on Blu-ray.