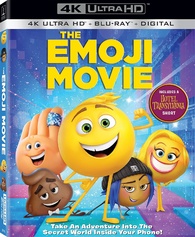 The Emoji Movie unlocks the never-before-seen secret world inside your smartphone. Inside it, a bustling city called Textopolis exists, home to all your favourite emojis who want to be picked by the phone’s user. Within Textopolis, each emoji has only one facial expression, except for Gene, who was born without a filter and is therefore bursting with multiple expressions. Determined to be normal, Gene enlists the help of his two friends to embark on an adventure to find the code that will fix him. In doing so, however, the three discover something that could threaten all of Textopolis.

The Blu-ray and Ultra HD Blu-ray both come loaded with special features that are fun for the whole family. They include a dance-along and lyric video, a look at the film’s dance moves, step-by-step tutorials for drawing emojis, and more!