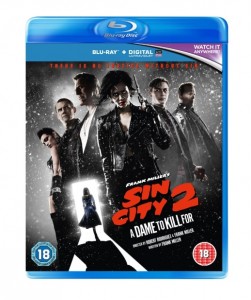 It’s been confirmed that Sin City: A Dame to Kill For will be released on Blu-ray Disc in Europe from 15th December.

The comic book sequel, directed by Robert Rodriguez (Sin City, From Dusk Til Dawn, Machete) and Frank Miller (who wrote the original graphic novels), sees stars including Joseph Gordon-Levitt and Josh Brolin join up with the returning Mickey Rourke, Bruce Willis and Jessica Alba in the stylized, visually stunning neo-noir crime thriller. Weaving together two of Miller’s classic stories with new tales, Sin City: A Dame to Kill For sees the town’s hard boiled citizens cross paths with some of its more notorious inhabitants. As you would expect from a film with such visual flair, the Blu-ray will look stunning – and also include exclusive special features including ‘The Movie In High-Speed Green Screen—All Green Screen Version’, ‘Makeup Effects Of Sin City With Greg Nicotero’, ‘Stunts Of Sin City With Jeff Dashnaw’, and ‘Character Profiles’.

Sin City: A Dame to Kill For is available to pre-order on Blu-ray now.