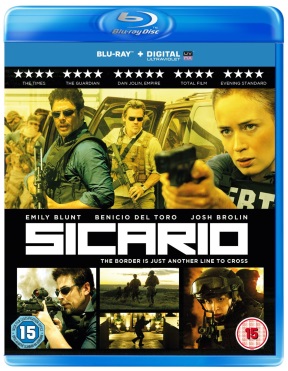 Lionsgate Entertainment has announced the Blu-ray release of Sicaro, the latest thriller from Denis Villeneuve, which will be available to buy on February 16th 2016.

Starring Emily Blunt, Benicio Del Toro, Josh Brolin and Jon Bernthal, Sicario explores the dangers in the border area between the USA and Mexcio. Blunt plays Kate Mercer, an idealistic FBI agent who is sent into Mexico as part of a clandestine operation to destroy a ruthless drug cartel. As the mission progresses, she is forced to reconsider her morals as she struggles to make it out of the country alive.

The Blu-ray will come with a number of special features, including a documentary about the visual design of Sicario, a look at how Emily Blunt, Josh Brolin and Jon Bernthal portrayed their characters, as well as the usual deleted scenes and audio commentary.