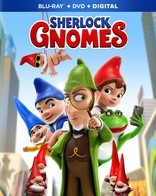 Paramount Home Media Distribution has officially announced that it will release Sherlock Gnomes on Blu-ray on 12th June.

Starring James McAvoy, Johnny Depp, Michael Caine and Mary J. Blige, Sherlock Gnomes follows Gnomeo and Juliet (McAvoy and Blunt), who discover that their friends and family have all gone missing. In a situation as dire as this, there’s only one person to call: legendary detective Sherlock Gnomes. Working together, the mystery takes them beyond the garden walls and across the city on an unforgettable journey to save the day and bring the gnomes home.

The Blu-ray comes with a number of special features, including a behind-the-scenes looking at the making of the film, a look at the London locations in the film, and tutorials on how to draw your favourite characters.