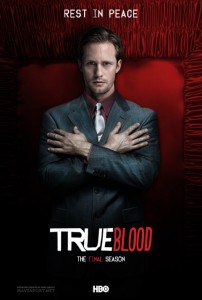 It seems mortality catches up even with vampires  as we say bon voyage to the residents of Bon Temps, Louisiana.  Sookie (Anna Paquin), Bill (Stephen Moyer) and Eric (Alexander Skarsgard) fight to the end in the final season of True Blood.

Released on Blu-ray on 10th November the seventh season of True Blood sees the Hep-V virus battle come to a climax in a supernatural world co-existing of humans, vampires, warewolves and shapeshifters – to name a curious few.

The Complete Season 1-7 boxset of the HBO drama will also be available to own on 10th November.

Blu-ray special features include previews, re-caps of prior seasons, ‘True Blood: A Farewell to Bon Temps’ and ‘True Death: The Final Days on Set’, plus episode commentaries from the all-star cast and creative team.