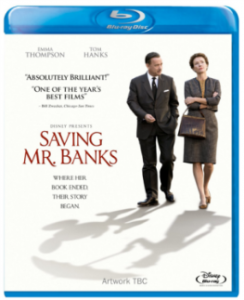 Walt Disney Studios has confirmed its captivating biopic of Walt Disney; Saving Mr Banks is due to hit Blu-ray in the UK from 24th March.

Tom Hanks plays a young Walt Disney, who promises his daughters that he’ll turn their favourite book, Mary Poppins, into a movie. Emma Thomson is “sheer perfection” as Travers, the author of Mary Poppins, who doesn’t want to sell the rights of her beloved story. This supercalifragilisticexpialidocious movie provides an intriguing perspective on Walt Disney as he eventually wins Travers over to his idea for the Mary Poppins film.

The Blu-ray is a perfect treat for Disney fans, coming complete with a tour of Disney’s film studios, and a heartfelt tribute to Mary Poppins composer Richard Sherman.

If you’d like further details on Saving Mr Banks, head over to Blu-ray.com .