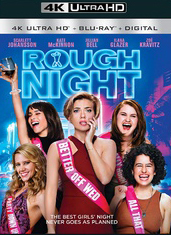 Sony Pictures Home Entertainment has announced that it will be releasing director Lucia Aniello’s comedy Rough Night on Blu-ray and Ultra HD Blu-ray from 5th September.

Scarlett Johansson, Kate McKinnon, Zoë Kravitz, Jillian Bell, and Ilana Glazer star in this laugh-out-loud caper, about a group of friends who meet in Miami for a bachelorette party. Jess (Johansson), an engaged politician, soon sees her night of excess come to a dark, albeit hilarious end, after a male stripper accidentally dies at their beach house. While their circumstances initially seem impossible, the group soon rallies together, as they realise all they need is each other.