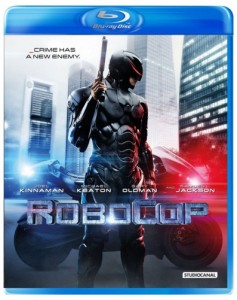 Director José Padiliha’s “exciting, pacey and thoughtful” reboot of the 1980s sci-fi classic, Robocop will be coming to the UK on Blu-ray from the 9th June.

Crime is rife in Detroit in 2028. Multi-national conglomerate OmniCorp is at the centre of police robot technology, and has been exporting it around the world. However, in the US, the public isn’t quite ready for robotic law enforcement. After one of the city’s best police officers, Alex Murphy (Joel Kinnaman) is critically injured in the line of duty, OmniCorp seizes the chance to treat him with their special robotics technology. Fully recovered, and now part man, part bot, Alex hits the streets to fight some of the city’s biggest criminals.

The Blu-ray comes with lots of extras including deleted scenes and a series of feature length extras on OmniCorp.