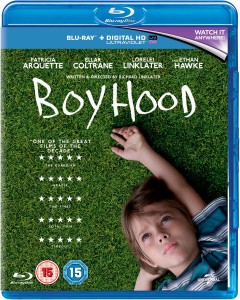 Boyhood, the innovative and critically acclaimed coming of age tale from director Richard Linklater, is on its way to Blu-ray early next year. The disc is set for release in the UK on 19th January.

Boyhood tells the tale of a boy called Mason as he grows over the course of 12 years. But rather than rely on special effects, make-up or different actors to show the ageing process, director Richard Linklater (Dazed & Confused, Before Sunset, School of Rock) filmed the movie for a few weeks every year for 12 years – meaning that the cast, which includes Ethan Hawke and Patricia Arquette alongside newcomer Ellar Coltrane as Mason, ages in real-time.

The film received near universal praise when it hit cinemas earlier this year, so if you missed it the Blu-ray is a great chance to catch-up. The disc will include a documentary on how this extraordinary film was made, and a Q&A with the cast.

For more details, head over to HighDefDigest.