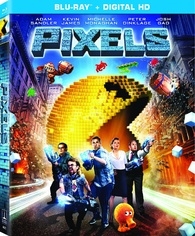 Adam Sandler’s latest comedy, Pixels, will be released on Blu-ray on the 7th December.

The action-comedy, starring Peter Dinklage and Kevin James alongside Sandler, sees aliens attack Earth after they misinterpret classic arcade games as a declaration of war against them. They bombard the planet using games like Donkey Kong, Pac-Man and Space Invaders as models for their attack. The US President Will Cooper (Kevin James) calls on his childhood friend and arcade expert Sam Brenner (Adam Sandler) to lead a team of gamers to fight the aliens and save planet Earth. The film is based on a short film which caused a stir on YouTube back in 2010 – you can watch the original here.

The Blu-ray will include a number of exclusive features, including an interview with Toru Iwatani, creator of Pac-Man, who actually has a cameo appearance in the film. Also included are a number of behind-the-scenes features, documentaries on the special effects and a look at the classic games that inspired the film.