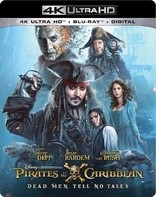 Fresh from announcing the release of Guardians of the Galaxy Vol 2, Disney has also announced that Pirates of the Caribbean: Dead Men Tell No Tales, will be available to own on 4K Blu-ray from 3rd October.

Johnny Depp returns as the swashbuckling mischief-maker Captain Jack Sparrow in this rollicking new tale set on the high seas, bringing with it all the fantasy, humour and action that have graced the series for the past 13 years.

This latest adventure finds Captain Jack Sparrow down-on-his-luck and feeling the winds of ill fortune blowing his way, as he finds himself hunted by deadly ghost sailors. Led by the terrifying Captain Salazar (Javier Bardem), the ghosts are determined to kill every pirate at sea, but first, they have a score to settle with Jack.

The film comes with a treasure trove of bonus extras, including a collection of behind-the-scenes features, conversations with the directors, secrets behind the characters, and much more.