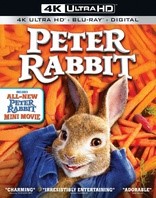 Sony Pictures Home Entertainment has officially announced that it will bring Will Gluck’s comedy Peter Rabbit to Blu-ray and Ultra HD Blu-ray on 1st May.

Featuring the voices of Rose Byrne, James Corden, Margot Robbie, Daisy Ridley and Elizabeth Debicki, the film follows Peter Rabbit, the mischievous and adventurous hero who has captivated generations of readers. Now, he takes on the starring role in his own cute, contemporary film with attitude, in which we see Peter Rabbit feud with Mr McGregor for the affections of the warm-hearted animal lover who lives next door.

Cordon voices Peter Rabbit, while Robbie, Debicki and Ridley lend their voices to the triplets Flopsy, Mopsy and Cotton-tail.

The Blu-ray and Ultra HD Blu-ray also comes with a trio of special features – a “Flopsy Turvy” mini movie, a dance along, and a look at the making of the film.