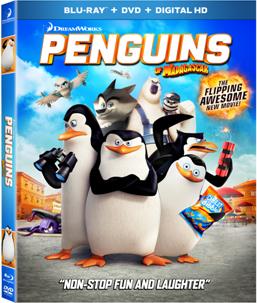 Skipper, Kowalski, Rico and Private – super-cute-super-spies team up with the elite North Wind team to save the world.

Not only is the animation impressive, even more so on Blu-ray (the penguin’s waddle has been captured beautifully) but the film also features the dulcet tones of John Malkovich, Benedict Cumberbatch, and Ken Jeong.

Comingsoon.net has a full list of special features, which include a Madagascar Mash (a compilation of the Madagascar films) and the Cheezy Dibbles Ad.