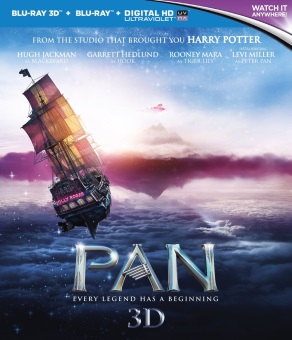 Warner Brothers Home Entertainment has announced that Pan, the live action adventure showing the origins of Peter Pan, Captain James Hook and Tiger Lily, will be released on Blu-ray from the 22nd December.

Newcomer Levi Miller picks up the role of Peter, a young orphan who has spent his whole life in a London orphanage after being abandoned by his mother. Then one night, he is whisked away to a fantastical world called Neverland, where he meets Tiger Lily (Rooney Mara) and James Hook (Garrett Hedlund), who take him on a magical journey of adventure and danger. Alongside his new allies, he must battle the fearsome pirate Blackbeard, played by Hugh Jackman, and uncover the real reason why his mother left him as a child.

Pan will include a number of special features, including commentary from director Joe Wright, a documentary about the history of Peter Pan, and a look at the creation of Neverland.